Dave Bouwman over at ArcDeveloper.net has announced new choices to the ArcDeveloper forums. The categories include; .NET 2.0 and ArcGIS 9.1, All Things Java, Software Development and Developer Jobs. If you are frustrated with the ESRI Support forums, why not give these a shot.

I’ve been playing around with Atlas the last week and having a blast. I still don’t have Visual Studio 2005 on my laptop because we only bought two licenses for this office so far so I’ve been using the free Visual Web Developer Express tool with pretty good results (it is no speed demon I’ll say that though). Anyway I had seen some press about this Atlas Virtual Earth map control in the blogs last week and finally gave it a shot today. I might need to find a .NET host because I can see really getting into these Atlas examples. Others are jumping on Atlas to use with ArcIMS too so there could be some interesting applications in the next few months. It looks like Jeremy is getting some good help from the chicken signed by Scott Morehouse. 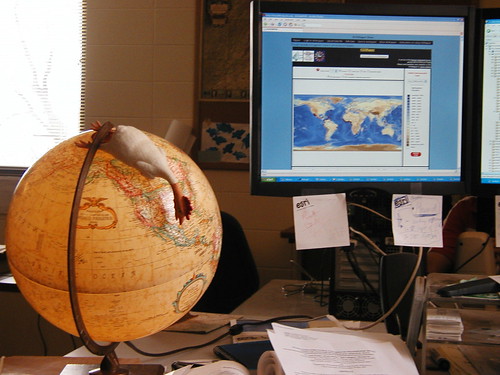 No word on the status of the other chicken and how it is doing.

Update – Word is that the .NET chicken is on strike.

I’m sure were all waiting for this. Take Google Maps and mix in Google Base and you get Google Real Estate. If you perform a search for “Real Estate” or “Homes For Sale” you get an option to search a zip code for any home for sale. Of course a quick gander at local homes for sale in the Phoenix area shows that Google Base has a long way to go before it can compete against Realtor.com. Update – looks like you can do the same thing with a car search too. I’m guessing we are seeing the integration of Google Base into the normal Google search.

Brian Glass released the Perl code for his ArcWeb mapping project a couple weeks ago and I’ve been meaning to post about it. If you’ve been looking for an ArcWeb 2006 Perl example, you should probably download the code. I’m not a huge Perl fan myself, but this example is quite easy to get working.

The Google Maps API blog announced that the new GMap API version 2 is out today (beta). The GMap v2 has been out for testing, but it is now officially part of the Google Maps API website. There are many improvements including the impressive “Fewer memory leaks” bullet point. cough

Google now has removed the page limit terms to the API agreement and they are nice enough to now give you a 90 day notice if they ever introduce ads into the API. The upgrade to your code seems as easy as changing v1 to v2, but I’m sure some mashups will have “issues”.

spatiallyadjusted.com is hard enough to type without the word planet in front. So I’ve spent the money and got a better (shorter) url. Please feel free to use http://www.planetgs.com from now on.

All these great AJAX interfaces makes one forget about how many different ways we provided feedback to the users waiting for the map to load. One of more interesting ones I saw back in the MapObjects IMS days was the Running Dog loading screen. You just sat and watched this dog run back and forth until MapObjects IMS returned your map.

Boy have times changed since Web 0.2!